Disorder Name: CarnitineThis is a natural substance found in muscle cells. It helps the body make energy from the fat in food and the fat stored in the body. It also helps the cells get rid of harmful wastes made during the breakdown of fat. Carnitine supplements may be used as a treatment for some metabolic disorders. palmitoyl transferase, type 1A arctic variant
Acronym: CPT1A arctic variant
Download PDF

WHAT IS CPT1A ARCTIC VARIANT?

CPT1A arctic variant is a form of classic CPT-1A deficiency. It is more common in the Inupiaq and Yu’pik populations in Alaska, and the Inuit population in Canada and Greenland. It is also seen in higher frequency among the indigenous people of Vancouver Island, northern coastal regions of Canada, Greenland, and northeast Siberia.

Like classic CPT1A deficiency, CPT1A arctic variant is a type of fatty acid oxidationThis is the process used by the body to change fatty acids, the building blocks of fat, into energy. It happens in the mitochondria – the small energy-producing parts found in each cell of the body. disorder. People with CPT1A arctic variant have problems breaking down fat into energy for the body.

CPT1A arctic variant is caused by problems with the enzyme called “carnitine palmitoyl transferase 1A” (CPT1A). In people with CPT1A caused by the arctic variant, the CPT1A enzyme does not work properly. This enzyme’s job is to help change certain fats in the food we eat into energy. It also helps break down fat already stored in the body. The difference between a wild type person and a person with CPT1A arctic variant can be seen below. 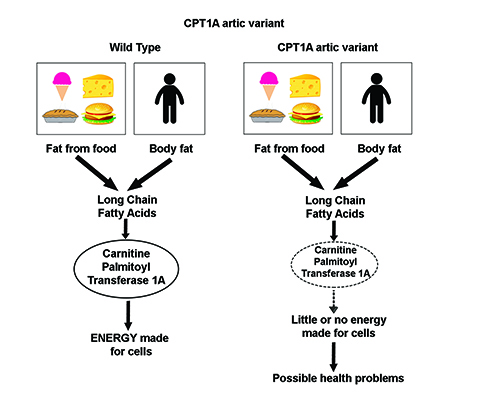 Energy from fat keeps us going whenever our bodies run low of their main source of energy, a type of sugar called glucoseThis is a type of sugar made from the carbohydrates in food. Glucose is found in the blood. It is the main source of energy for the body and brain.. Our bodies rely on fat when we do not eat for a stretch of time – like when we miss a meal or when we sleep.

The arctic variant causes the CPT1A enzyme to work more slowly than usual. This makes it harder for the body to make energy from fat. Most of the time, this does not cause any problems. However, when young children get sick and are not able to eat as much as usual, they may not be able to break down fat fast enough to provide all of the energy they need. At these times, children must be given a source of glucose (sugar) for energy.

WHAT HAPPENS IF CPT1A ARCTIC VARIANT IS NOT TREATED?

Most infants and children with CPT1A arctic variant never have any symptoms. However, some children will have problems when they are sick and cannot eat or drink.

We can’t be sure when children with CPT1A arctic variant will start showing symptoms, but we think this is most likely in children less than 2 years old. The most common symptom in young children, especially infants, is sleepiness. Older children may also get sleepy, but more often their first symptom is often irritability or other changes in behavior.

If children go too long without eating or drinking enough glucose-containing fluids (such as when they are sick), they can have an illness called a metabolic crisisThis is a serious health condition caused by low blood sugar and the build-up of toxic substances in the blood. Symptoms of a metabolic crisis are poor appetite, nausea, vomiting, diarrhea, extreme sleepiness, irritable mood and behavior changes. If not treated, breathing problems, seizures, coma, and sometimes even death can occur.Metabolic crises happen more often in people with certain metabolic disorders (some fatty acid oxidation disorders, amino acid disorders, and organic acid disorders). They are often triggered by things like illness or infection, going without food for a long time, and, in some cases, heavy exercise.. Some of the first signs of a metabolic crisis are:

If a metabolic crisis is not treated, a child with CPT1A arctic variant can develop:

If treated quickly and appropriately, these symptoms can be reversed. However, if a child has too many metabolic crises, they could develop brain damage. This brain damage can result in learning problems or intellectual disabilities. Therefore, it is important that infants and children with CPT1A arctic variant receive prompt treatment if they exhibit symptoms of metabolic crisis. Treatment should help to avoid potential long-term effects on development.

WHAT IS THE TREATMENT FOR CPT1A ARCTIC VARIANT?

The following are treatments sometimes recommended for children with CPT1A arctic variant:

Children with CPT1A arctic variant who are sick and not eating as much as normal need to drink fluids with glucose, even if they may not feel hungry. This is because they need to avoid low blood sugar (hypoglycemia) and other problems. Children who are sick are often unable to drink or do not want to drink. In this case, they may need to be treated in the hospital to prevent serious health problems.

WHAT HAPPENS WHEN CPT1A ARCTIC VARIANT IS TREATED?

WHAT HAPPENS WHEN CHILDREN WITH CPT1A ARCTIC VARIANT GROW UP?

Most children with CPT1A arctic variant will never have any symptoms. In those who do, prompt and careful treatment will prevent long-term problems in most children, allowing them to grow and develop normally, and live healthy lives. Some symptoms, such as feeling the need to eat frequently, may last into adulthood. However, a metabolic crisis or other severe problems usually do not happen after 2-3 years of age.

WHAT CAUSES THE CPT1A ENZYME TO NOT WORK CORRECTLY?

Genes tell the body to make various enzymes. The CPT1A gene instructs the body to make the CPT-1A enzyme. Everyone has two copies of the CPT1A gene. People with CPT1A arctic variant have the same change in both copies of their CPT1A genesA segment of DNA that contains the instructions to make a specific protein (or part of a protein). Genes are contained on chromosomes. Chromosomes, and the genes on those chromosomes, are passed on from parent to child. Errors in the DNA that make up a gene are called variants and can lead to diseases.. The gene change (variant) is called C1436T or P479L and referred to as the arctic variant. This arctic variant makes the CPT1A enzyme work slower than usual, which makes it harder for the body to make energy from fats.

HOW IS CPT1A ARCTIC VARIANT INHERITED?

To see all the different ways CPT1A arctic variant can be inherited, please see the last section of this handout “CPT1A Arctic Variant – Inheritance Patterns.”

CAN OTHER MEMBERS OF THE FAMILY HAVE CPT1A ARCTIC VARIANT?

HOW MANY PEOPLE HAVE CPT1A ARCTIC VARIANT?

CPT1A arctic variant is more common (and is considered to be the normal gene) among the Inupiaq and Yu’pik people of Alaska, and the Inuit people of Canada and Greenland. It is estimated that about 7 in every 100 infants (about 7% of infants) in Alaska are born with CPT1A arctic variant each year.

The reason that CPT1A arctic variant is more common in the Inupiaq and Yu’pik people of Alaska and the Inuit people of Canada and Greenland is not known. Many believe that the arctic variant is beneficial for people who eat a traditional native diet containing proteinA molecule that makes up many parts of every cell in the body. Examples of proteins include hormones, enzymes, hair, and antibodies. Proteins are made up of 20 different types of individual units called amino acids. It is the order of these amino acids in a protein that determines what form and function a protein has. Each gene holds the instructions for making a single protein. and fats from fish and sea and land animals.

DOES CPT1A ARCTIC VARIANT GO BY ANY OTHER NAMES?

The name arctic variant refers to a specific change in the DNADeoxyribonucleic acid (DNA) is a molecule found in the chromosomes that carries genetic information. DNA is composed of four units (called bases) that are designated A, T, G, and C. The sequence of the bases spell out instructions for making all of the proteins needed by an organism. A gene is a section of DNA that holds the instructions for a specific protein. A change in one or more of the DNA bases making up a gene is called a mutation. Some mutations change the protein instructions and can lead to particular health problems or disorders. Each parent passes half of their chromosomes, and thus half of their DNA instructions, onto their children. It is these instructions that cause certain traits, such as eye or hair color, to be inherited. of the gene for CPT1A. There are several other ways that this variant might be identified:

It might also be called the CPT1A P479L polymorphismA change in the DNA sequence (variant) that is present in at least 1 percent of the population and is not considered harmful. One example of a polymorphism is in the hair color gene. Slight changes in the DNA sequences make the hair blond or brown., or CPT1A P479L mutationA change or alteration that occurs in the DNA. Mutations can be caused by the environment (sun, radiation, or chemicals), aging, or chance. Often the causes of mutations are never known. Some mutations do not affect the information contained in the DNA. Other mutations have serious consequences on how that gene functions..

There is another type of CPT deficiency called CPT-1B, or “muscle type.” CPT-1B is not discussed in this fact sheet. 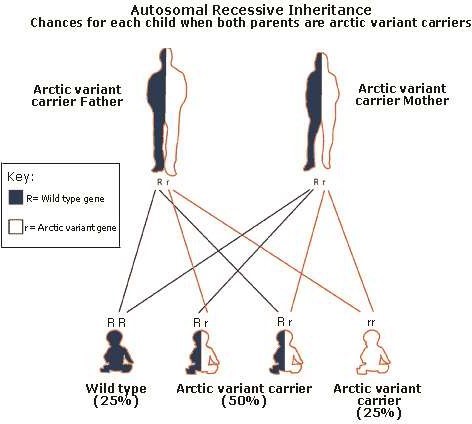 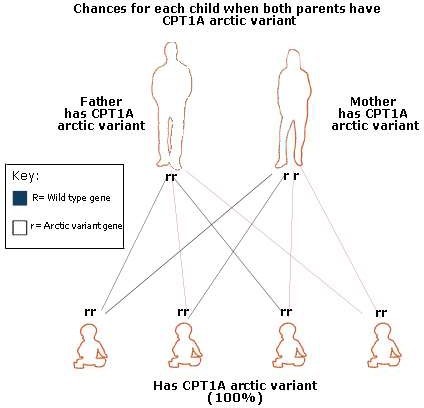 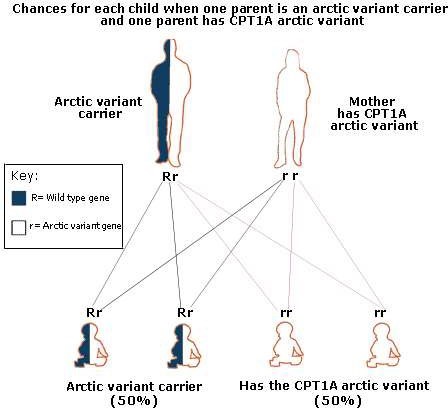 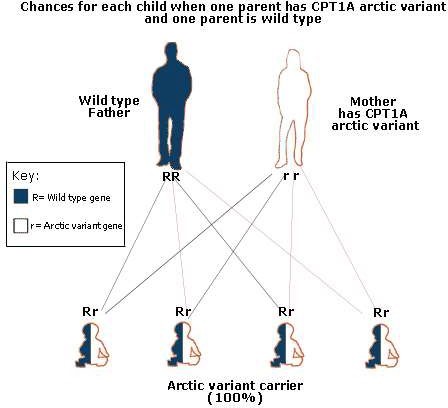 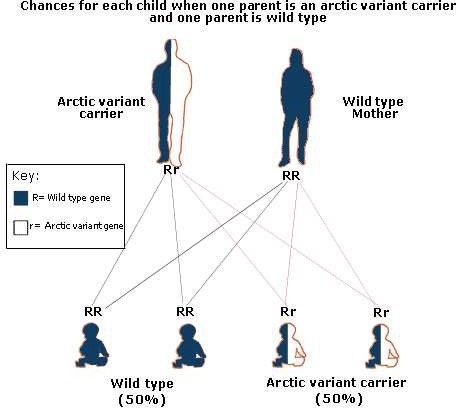 If neither parent has a copy of the CPT1A gene with the arctic variant (both have wild type), then none of their children will have it either (all children will be wild type). No diagram provided.

THIS INFORMATION DOES NOT PROVIDE MEDICAL ADVICE. All content (“Content”), including text, graphics, images and information are for general informational purposes only. You are encouraged to confer with your doctor or other health care professional with regard to information contained on this information sheet. After reading this information sheet, you are encouraged to review the information carefully with your doctor or other healthcare provider. The Content is not intended to be a substitute for professional medical advice, diagnosis or treatment. NEVER DISREGARD PROFESSIONAL MEDICAL ADVICE, OR DELAY IN SEEKING IT, BECAUSE OF SOMETHING YOU HAVE READ ON THIS INFORMATION SHEET. This project is supported by a grant from the MaternalHaving to do with the mother. and Child Health Bureau, Health Resources and Service Administration, Genetic Services Branch, MCH Project #:UH7MC30774-01-00 http://mchb.hrsa.gov